This August saw the launch of ‘Voices of civilian internment: WWII Singapore’, a new collection of digitised archive material made available through Cambridge Digital Library with the support of the Wellcome Trust. The collection brings together records held by three repositories: the Royal Commonwealth Society Collection, the Cambridge Assessment Group Archives, and the Salvation Army International Heritage Centre. Together the material documents various aspects of the lives of civilians who were interned in the Changi and Sime Road camps which were established in Singapore after Japanese forces invaded in 1942.

The Heritage Centre was invited to contribute to this resource because the internees at Changi included fourteen Salvation Army officers from Europe and North America who were on missionary appointments in Singapore and Malaya [Malaysia] at the time of the Japanese invasion. There were also several lay Salvationists imprisoned in Changi who established their own Salvation Army corps inside the camp. Our archives include records of these officers and Salvationists, and this blog post will give a brief outline of some of their stories.The officers interned in Changi were mainly men. Most of their wives and children, as well as unmarried women officers in the region, had been evacuated earlier. However, some women were not so fortunate. One very poignant story recorded in our archives is that of Myra Wilkinson and her husband Elijah. Both from Chesterton, Myra and Elijah served as Salvation Army officers in the UK and China before being transferred to Malaya in January 1942. Their arrival in Singapore coincided with its fall. Myra boarded the HMS Giang Bee with fellow officer, Etta Bird, and other evacuees on 12 February. Thinking his wife had escaped to safety, Elijah was among those ordered to report for internment a few days later on 17 February. He spent three years in Changi and Sime Road, all the time unaware that the Giang Bee had been sunk by a Japanese destroyer the day after it departed from Singapore. Myra and Etta had both died in the incident.

Equally harrowing is the story of Scottish officer Charles Davidson and his wife Bodil, originally from Denmark. The Davidsons served in Japan for most of the 1930s but were transferred to Singapore in 1937. When Singapore fell, Bodil and their daughter were safely evacuated to Australia via Ceylon. Bodil spent the rest of the war working in Australia, separated from Charles who had been imprisoned in Changi. A Japanese speaker, Charles acted as a translator and liaison officer between the guards and internees in the camp. In May 1945 Bodil transferred to the UK and following Charles’s release in September he set out to join his family there. He arrived home on 5 November to be greeted with the terrible news that his wife had died two weeks earlier.

Husbands and wives who were both interned nonetheless endured lengthy separations. Within the camp couples were allowed little contact with one another. Four women officers were imprisoned in Changi, but the only married officer among them was Florence Jordan. She and her husband Joseph spent their internment apart, Joseph as a hospital orderly in the men’s section and Florence working in the children’s kitchen of the women’s and children’s section.

The three other women officers interned were Margaret Burns, Bertha Grey and Elsie Willis. Margaret worked with Florence Jordan to set up a Sunday school within the camp but subsequently suffered a fall and was confined to bed in a plaster jacket for most her imprisonment.For unknown reasons, Bertha and Elsie were given special dispensation to remain outside the camp after other Europeans had been instructed to report for internment. Permission was initially granted them for two weeks, but in the end they remained free to oversee the continuation of The Salvation Army’s social, evangelical and relief work in Singapore for seven and a half months. During that time they devised a way of passing messages, food, medicine, and other supplies and comforts into the camp via sick internees whom they visited in hospital. When they were eventually brought into Changi, they nursed the sick in the prison hospital. In 1946, they were awarded MBEs for their services in Malaya.

Most of the male officers in the camp also undertook hospital work as orderlies and chaplains. Frank Bainbridge’s assistance was particularly valued by the camp surgeon who later wrote of him ‘I could not have wished for a more suitable assistant under such extraordinary conditions.’

Herbert Lord, who had been Commanding Officer of The Salvation Army’s work in Malaya when the country fell to Japan, served as welfare officer for the camp. However, Changi would prove not to be his only experience as a prisoner of war. Two years after being released, Herbert was appointed Territorial Commander of The Salvation Army in Korea. He was still in this post when South Korea was invaded by the North Korean People’s Army in June 1950 and was interned once again.Since the healthcare, welfare and administration duties taken on by the Salvation Army officers in the prison left them little time for ministry, a number of Salvationists decided to set up their own Salvation Army corps within Changi so that they could continue their regular worship in internment. The prisoners made a flag and a crest to serve as emblems of their corps and produced a manuscript issue of The Musical Salvationist to enable congregational singing. The Salvationist prisoners also started their own magazine, The Liberator, to record their experiences in the camp.

These items and many more have been digitised and can be viewed online on Cambridge Digital Library. To find out more about the officers and Salvationists mentioned in this post and to explore the stories of other internees, do visit this fantastic new resource. 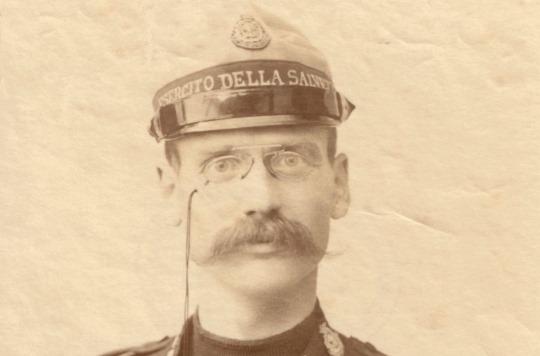 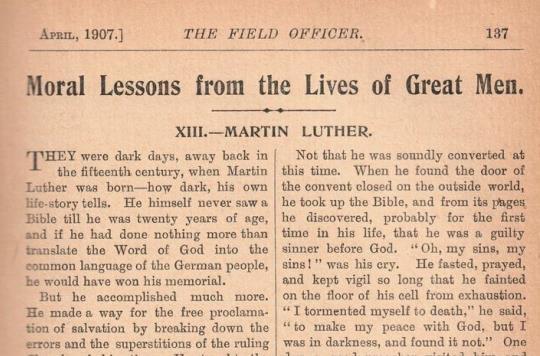 On 31 October 2017 it is 500 years since Martin Luther (probably) nailed his 95 theses to the door of the Schlosskirche in Wittenberg... 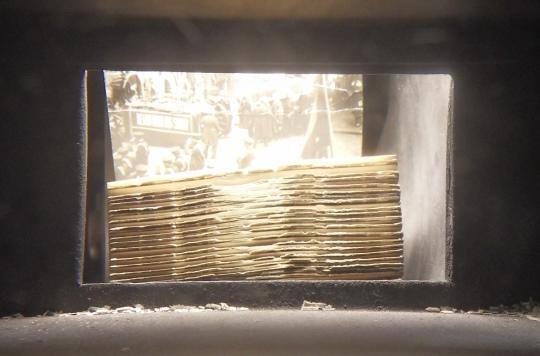