Two million meals for people in need during pandemic

The Salvation Army has provided more than two million meals [1] to people struggling to afford food since lockdown started a year ago.

This sombre milestone was reached as new figures show [2] that one in five people might need to seek charitable support for the first time in their lives.

The church and charity is warning that, as we move out of lockdown, more people are going to struggle to cope as the economic impact of the pandemic starts to bite.

Adrian Clee, The Salvation Army’s Emergency Response Officer, said: “There is no doubt that Government interventions like the Universal Credit uplift and the furlough scheme helped many keep their heads above water, but we still saw incredibly long queues of people looking for our help.

“As the country went into lockdown, we knew we had to move fast. We established 22 regional food hubs across the UK where we bulk bought food from wholesalers to help our local centres and churches (corps) meet the demand.

“As the pandemic forced homeless drop-in centres to close, we took to the streets to ensure people still got hot food and outreach support. We moved our employment support and debt advice online and even fed lorry drivers stuck on the motorway when the Dover port closed.

“Emergency food support is just one aspect of our work, but beyond that we seek to address the root causes of poverty. Our debt and employment advice services often play a key part in enabling individuals and families to move from a reliance on emergency food support to a situation where they can support and sustain themselves going forward.”

Since the beginning of the first lockdown last year The Salvation Army support for vulnerable people has grown to meet demand. In particular, it provided:

During the pandemic, The Salvation Army has supported mum-of-four, Jodie, whose life was turned upside down when her fiancé Ollie, 32, lost his job as a freelance car parts sprayer after everything shut down in March, reducing their income to zero.

Even when work picked up again over the summer, the family were using every penny to pay off debts built up during lockdown and found themselves relying on The Salvation Army for food, gas and electricity.

“We have no idea where we would be without Victoria and Shawn from The Salvation Army. I would not like to think where we would have ended up. They were like angels out of nowhere turning up on our doorstep at the beginning of lockdown and have helped us ever since.”

“The Salvation Army would not have been able to do this work without the support of our donors and supporters. Thanks to their donations we have been able to ensure vulnerable people have been provided with food on their table, warmth in their homes and a listening ear during their time of need.”

[1] This figure relates to food distributed from the 22 Salvation Army food hubs to local churches (corps) and centres since the food hubs launched in May 2020. 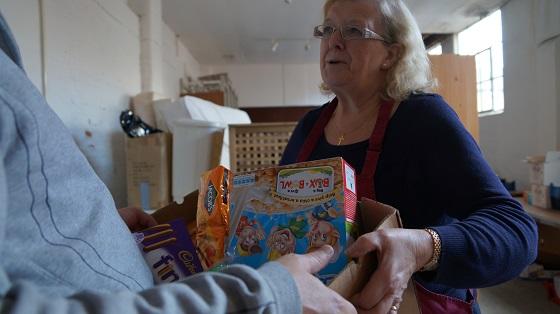