An interview with a survivor of slavery supported by The Salvation Army has won an Amnesty Media Award for BBC Radio 5 Live’s Nihal Arthanayake Show.

Modern Day Slavery – Sanu was given the 2020 Radio and Podcast Award at the prestigious Awards run by Amnesty International UK. It features the story of Sanu – not his real name -  who came to the UK from Bangladesh to study but was tricked and trapped into working in slave-like conditions, seven days a week for seven years.

Recorded when Nihal visited a Salvation Army safe house where Sanu now lives, the interview was first broadcast in November 2019, when it provoked an overwhelming response from BBC 5 Live listeners. Still available as a 5 Live News Special, Sanu describes how he was befriended by a man who then started to threaten and control him, forcing him to work in his shop for little or no money. He said:

“He knew how to control me because I had no other friend in the UK. He controlled me like in a video game with a remote controller. He took every minute, second from me.”

Sanu was helped to escape by a concerned and observant customer and is now recovering well in a Salvation Army safe house where he is receiving counselling and other support.

Following the BBC interview Sanu found the courage to continue to raise awareness of modern slavery in the hope of protecting others in the future. He is also volunteering at his local mosque and with The Salvation Army. Sanu said:

“Where I am now with The Salvation  Army they really work hard to help me. They are so kind. I feel lighter than I did before. Every step in my life is helpful in every way. I have gone through a bad story, but it might help someone like me, that people will learn and this will stop them going through what I went through.”

In the run up to Anti Slavery Day 2020,  Nihal caught up with Sanu again to ask how he had coped during lockdown and congratulate him on the Amnesty Media Award. Typically humble, Sanu simply thanked The Salvation Army and the BBC for giving him the opportunity to let his voice be heard.

Sanu described his frustrations at the fact that the man who enslaved him has escaped police investigation but also how he continues to keep busy helping charities, representing other survivors with opinion formers and studying hard with British Council online courses The Salvation Army has arranged for him.

Sanu hopes soon to have certainty in his future and to finally overcome the deep-seated trauma left by his ordeal. Speaking of the man who enslaved him Sanu said:

“He is still chasing me in my dreams. I see him often.”

This interview is available for a short time on BBC iPlayer in the first hour of the show.

It contributed to The Salvation Army’s activities around Anti Slavery Day 2020 which included sale of special edition face masks as part of its #WeAreNotForSale campaign designed to spread awareness of modern slavery. The design features a barcode to symbolise how victims are treated objects that can be bought and sold. Masks can be bought for £5.99 via the organisation’s online shop with all proceeds going towards the charity’s Victim Care Fund which provides vital additional support to help survivors of slavery move on with their lives. 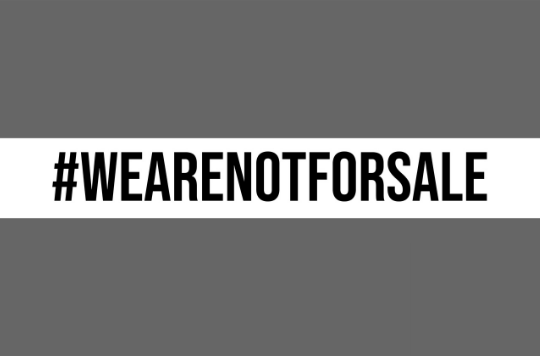