The Christmas dinner was organised through a team-up between the Celtic Manor Resort, the Salvation Army and the charity Eden Gate.

A team of 10 chefs and waiters from the five-star Celtic Manor Resort cooked a Christmas dinner for more than 80 people over two sites, one of which was the Army’s Newport hall. The meal included a soup, turkey dinner, and Christmas pudding.

Alongside providing the food and the time of staff the resort also donated 70 Christmas gifts for The Salvation Army to distribute. Staff members also donated items including winter clothing, toiletries and food bars.

Celtic Manor Resort director of food and beverage Glenn Lewis, said: “I was aware of the fantastic work done by The Salvation Army, as we welcome their band to play Christmas carols and raise funds in the hotel lobby on Christmas Eve.

“We have also donated Christmas food hampers and gifts to charities in the past but this year we decided we wanted to do something more, so we started planning this Christmas dinner with The Salvation Army team in Newport.”

Territorial Envoy Ray Baynes, of the Salvation Army in Newport, said: “Christmas and the lead-up to Christmas can be an emotional time when many people may feel isolated and lonely.

"We’re very grateful to Glenn and all the staff at Celtic Manor Resort for their kindness, community spirit and dedication to the people of Newport.” 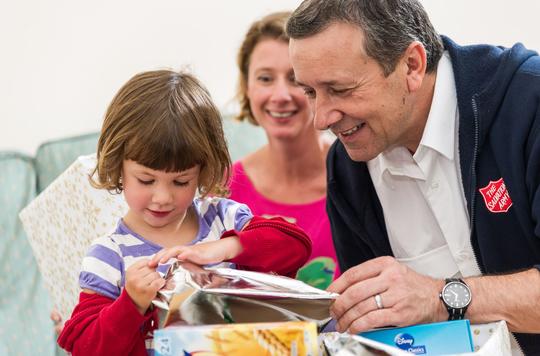 Support the Christmas Present Appeal by finding your nearest Salvation Army and donating.