Music forms an integral part of Salvation Army worship and evangelism. Bands and songster brigades are an important part of church life and public events with the brass band as the most recognised feature of Salvation Army music.

Early Salvationist musicians drew upon a rich heritage of British singing and band playing, including contemporary church and temperance bands.

William Booth was uncertain about organised music groups. Nevertheless he recognised that music was an effective evangelising tool that had the power to draw in large audiences of potential converts. In 1878, when Salvationists in Salisbury were facing opposition in the streets, Charles Fry a local Methodist preacher and his three sons brought their brass instruments to help in the open-air meetings. After the success of the Fry family, Salvation Army bands were encouraged and sprung up quickly in corps across the country. By 1883 there were 400 British Salvation Army bands.

William Booth was keen to distinguish the music of the Salvation Army from other church music which he considered overly sophisticated. He issued guidelines to bandsmen and songsters to produce simple songs with an emphasis on strong, clear ‘soul-saving’ messages. He also believed that Salvationists ‘must sing good tunes’. He is famously quoted as saying ‘I don’t care much whether you call it secular or sacred. I rather enjoy robbing the devil of his choicest tunes’. For this reason Salvationist musicians moved away from solely using traditional hymns and began to set new words to Victorian songs, such as popular music hall melodies. Audiences recognised and liked these contemporary songs and so this was an effective way of spreading the Christian message.

Today, Salvation Army music has expanded globally. There are over 2,500 brass bands worldwide and over 427,000 music group members. Salvationist bandsmen and songsters across Territories continue to draw upon their own cultural background and create vibrant musical styles to accompany worship and attract new audiences.

Music is still used as an aid to worship whilst keeping that integral role as a way of engaging people to the church. Music has evolved since its inception in to The Salvation Army with groups such as community choirs, jazz bands, ukulele bands and rock bands which all plays a part in being relational and bridging the gap between Church and its community. Music still has a special place for bringing people closer to God. 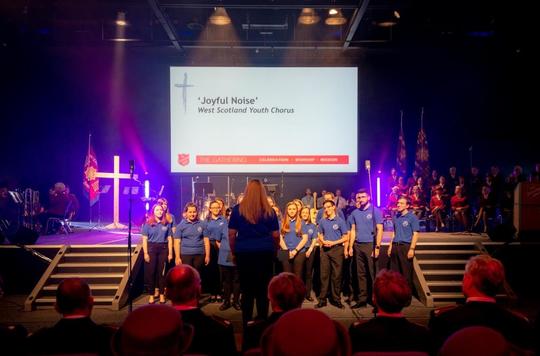 Empowering and supporting ministry and mission through the arts