We, the members of Worthing Salvation Army, are determined to introduce people to Jesus, develop our faith, and work towards meeting the needs of the community. 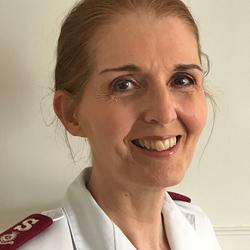 Sunday 31st July 10.30 am Seafront Service Lion's Festival. No meeting at the hall.

Our Sunday Meetings are now being live streamed, see Facebook for viewing details.

Recordings of Sunday meetings are available through our YouTube Channel: https://www.youtube.com/channel/UCrgAvBKrsNkz_URxXsTIAlQ

The Welcome In Programme at the Salvation Army, Worthing offers a range of tailored groups to suit our community. For more information on our Community Programme and how you can get involved please contact the Reception 01903 234497.

Please note:- not all activities have recommenced after COVID19 closure

Major Pam Knuckey is taking up her appointment as corps officer at Worthing on 22 July 2021. Prior to becoming a Salvation Army officer, Pam studied maths at Cambridge and worked in commercial aircraft aerodynamic design research for British Aerospace. Her roles as a Salvation Army officer over the last 29 years include corps leadership in the South East, youth and children’s ministry from a divisional headquarters and four roles at The Salvation Army’s Territorial Headquarters in London. Most recently, Pam led TSA’s research team for five years. Pam is excited about her new role - she is looking forward to getting to know her congregation and wider community in Worthing, and seeing God at work in the town.

The Songsters is the adult choir of the Salvation Army, taking part in services and other events.

Singing is good for your health, mentally and physically, as is the fun and fellowship we share together.

Three times a year we form an "open to all" choir for specific occasions and extend the opportunity to make music to many more.

Wendy McDaniel, the leader, can be contacted via the Welcome In.

The Worthing Band of the Salvation Army came into being in 1884. While General William Booth was conducting the opening services of Brighton Congress Hall, in March, an announcement was made that a warm friend and sympathiser of the Army had given a sum of money for the purchase of instruments for a band at Worthing. Apart from a short time when the band ceased to function between 1885 and 1888 due to the Worthing Riots, the band has been making music locally ever since. The main purpose is to communicate the message of the Christian Gospel through music and you will often hear the band playing in Montague Street Worthing or during the summer months at the pier head on Worthing seafront. The band plays music written mostly by Christian composers as well as both traditional and modern hymns, many of which are well known. It is the aim of the band to challenge the listener as well as encourage them on their spiritual journey.

The Salvation Army has a rich musical heritage dating back to 1878 when the first Salvation Army Band was formed and the Worthing Band, having celebrated 130 years of service, continues to build on this.

The band meets for a regular rehearsal every Thursday at 7.45pm to prepare for Sunday when the band provides accompaniment for the singing and plays a piece of music to bless, encourage and challenge the listener as a part of the service.

The band can often be found in the local area supporting Civic events such as the Remembrance Day Parade, holding concerts in local churches and cathedrals,  joint fund raising concerts with other local musical groups including the local youth concert band. The band also supports other Salvation Army centres and has undertaken tours of Switzerland, Norway and Holland.

The band totals 31 players all of whom are committed Christians. Both men and women who make up the band commit their time voluntarily and also represent a selection of professions including Company Directors, Accountancy, Information Technology, Civil Service, Engineering Teaching, Students, Banking, Pharmaceuticals Health Service and a number of retired professionals.

In recent years the band has opened its doors to anyone interested in joining for rehearsal as a guest or to simply listen to the music. If you are interested in learning more please contact Karen Kennard via the Welcome In

During recent years a Worthing Training Band of the Salvation Army was formed. The purpose of this band was to provide a forum for anyone, regardless of age, interested in learning to play an instrument or wishing to return to playing an instrument.

The Worthing Salvation Army has a rich musical heritage dating back to 1884 with the Worthing Band, having celebrated 130 years of service.  As members retire from the Senior Band there is a need for others to take their place and members of the Training Band are given the opportunity and are encouraged to transfer into the Worthing Band of the Salvation Army.

The main aim of the band along with encouraging new players is to communicate the message of the Christian Gospel through music. The band plays music written mostly by Christian composers as well as both traditional and modern hymns.

The band meets for a regular rehearsal every Thursday at 6.45 pm and participates in Sunday Youth Services when the band provides accompaniment for the singing and plays a piece of music to bless, encourage and challenge the listener as a part of the service.

The band totals 15 players all of whom are committed Christians. Everyone in the band commits their time voluntarily and the band is made up of students and older members who are representatives of various professional groups.

The Worship Group consists of a small group of singers and instrumentalists who accompany and lead the congregation in Contemporary Worship songs in meetings.

The group has also lead worship in “First Sunday Church” and features prominently in a number of events throughout the year, including the Christmas Carol Concert.

Barbara Richards, the leader can be contacted via the Welcome In.

The Singing Company is our Church's choir for children from age 7.

In addition to regular involvement each Sunday the choir gives all of its members the opportunity to grow and develop musically and spiritually within the church, and have a lot of fun besides.

Outside of Sunday worship the choir is involved in a number of Church and community concerts and activities.

Amanda Greenwood, the leader, can be contacted via the Welcome In.

Our Charity Shop at 1-3 Rowlands Road

Separated Parents come to meet their children in a safe environment.

Fortnightly Saturday Mornings from June 12th at 10am

Within the Salvation Army and more specifically the Welcome In programme, volunteers are at the heart of what we do. Without people to help we would not be able to make such a positive difference in the lives of others and we are so grateful for all the amazing and challenging work our volunteers do!

With our aim to impact more lives, there are always opportunities for people to help. We offer a variety of volunteering prospects and would love you to work with us to support our mission. If you would like to find out more about our volunteering openings please contact Reception on 01903 234497

Here at Worthing Salvation Army, we have been reaching out to identify and meet the spiritual and practical needs of the people in our area for almost 140 years. The recent pandemic has forced us to curtail our full range of services, but it has also opened up more opportunities to work with and for our community. We are so looking forward to resuming our full programme soon.

Pre Covid Our Community Café offered a relaxing and friendly environment for all ages and is the hub of our centre. We hope to get this running again soon.

The supported Child Contact Centre at the Salvation Army Worthing aims to provide a facility for children to spend time with parents when there have been family breakdowns.. It is a friendly, neutral and child centred environment that provides toys and games that reflect the diverse needs of children of all ages. Accredited by the National Association of Child Contact Centres, our centre's main focus is the safety and protection of the children.

One of our main aims is to target Social Isolation in Worthing and we offer multiple groups and services to tackle this issue. These include Knit and Natter , Cameo club ( over sixties ) and a Toddler Group, which are all great ways to meet new people.

Our visiting Befriending scheme, Welcome Friends, supports those who are experiencing social isolation, especially those who live alone. During lockdown and throughout the pandemic, the need for our service increased vastly. Our visiting befrienders kept in touch with doorstep visits; dropping off shopping; sending letters, cards and emails and making regular phone calls. We are now starting to resume our regular home visits.

As part of our Befriending scheme, Care and Share is a mutual support group for those who have a caring role, for family members of friends. We meet monthly for discussions over coffee; activities, quizzes and outings. Care and Share is set up to provide a strong support network for our members.

For several years we were able to provide support for the homeless and the following are just two examples:

- providing overnight accommodation every Friday between January and March. This was in partnership with six other local churches.

- providing a lunchtime meal with a drink, at no cost, in our community café. This was a year round service.

Covid restrictions meant we had to suspend these services, but during this period we have been able to

- opening our doors last winter on a Saturday afternoon as a drop in service for the street homeless to meet some of their essential needs..

Other forms of supports will either be re-established or introduced once we are able. However the services we offer are often only possible with support from within the local community ,by way of donations( including clothing and bedding in addition to finance ) for which we and those we support are grateful.

With our aim to impact more lives, there are always opportunities for people to help. We offer a variety of volunteering prospects and would love you to work with us to support our mission. If you would like to find out more about our volunteering openings, please contact Reception on 01903 234497.