Volunteering at a foodbank is 'incredibly moving' says John

A South London man who has spent lockdown volunteering at a local Salvation Army foodbank with his teenage children has described it as ‘incredibly moving’.

50-year-old married father-of-two John King from Brixton is an electrician and he trains people to get qualified in the trade through The Salvation Army’s Employment Plus programme.

But when lockdown began and with his day-to-day work put on hold, John decided to volunteer to be re-deployed by The Salvation Army and found himself helping run the church and charity’s foodbank in Feltham.

Soon enough John had roped in his teenage son and daughter – Sam and Jenna, and the trio have been regularly rolling up their sleeves at The Salvation Army’s base at Bedfont Lane since then.

“I’ve been involved in three food projects at Feltham and the first of those was the foodbank where we have been supplying food every Wednesday to countless local families – I’ve lost track of how many people we’ve been supporting” said John.

“Taking on the challenge of running a foodbank has been amazing and I have been making sure we are stocked up and been able to supply clients with enough food to last them and their families a week. I have also packed up food bags and done some deliveries and helped the volunteer drivers load their cars and of course made sure they had all the PPE they need.”

And while helping out at Feltham, John has seen the impact of The Salvation Army’s support for some of the oldest and youngest members of the local community.

“Delivering food to older people who were close to tears - so thankful that we were able to help them in their time of need, has had a big impact on me. We’ve also made food parcels for 70 children from a local school who would have had free school meals and we made sure they had a breakfast and lunch for the week.

"Watching them coming here and seeing their eyes light up when they got a glimpse of what’s in the food bags - things that most of us take for granted, has also been incredibly moving” added John.

“Being able to help and do something that is making a difference to people’s lives has made a lasting impression on me and I’ve made friends with some very special people at Feltham and I will miss them when I return to my normal role.”

And John’s contribution hasn’t gone unnoticed by those who’ve worked alongside him as well, as Captain Ellie Shakespeare of the Salvation Army in Feltham explained:

“John’s been at the heart of Feltham Salvation Army’s Covid-19 response. Whether it’s been buying, sorting, packing or delivering food; cooking for victims of human trafficking; befriending clients and filling out forms; to loading volunteer drivers’ cars, John has got stuck in. Whatever the task, his compassion and desire to make a difference has been evident. He has had a huge impact in the few short months that he’s been deployed here.” 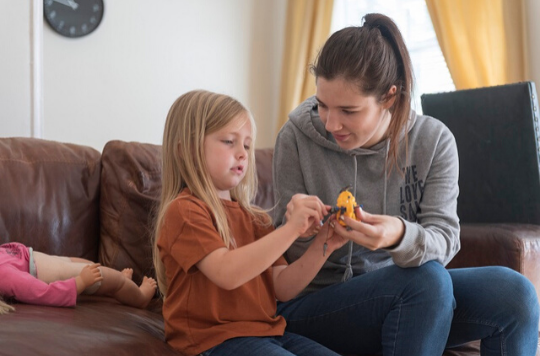 Help us support families who need it most