Inspired by small acts of kindness and the Captain Tom Moore story, the Whitmore family from New Malden in Surrey have devised an unusual way to raise much needed funds to support The Salvation Army.

Creating a virtual sporting world of ‘Ducksbury’, with 16 plastic duck characters each set to compete against each other on water, the family have invested many hours to devise the fun-filled race, known as the ‘Ducksbury races’.  Race supporters were made from lego and there is even a camera crew on hand to capture the race.

The family decided to donate the funds raised, to The Salvation Army after receiving a newsletter about the church and charity’s work helping those affected by the coronavirus pandemic.

Maxine, a speech and language therapist, was inspired to create the duck characters based on the children she works with and wanting to involve them in the project. She said: “I work with children with developmental language disorder in a specialist unit and I wanted to involve them”.

The starting line-up for the water race is an eclectic mix of characters from different backgrounds including a bridal party, a judge, an aviator, a spa duck, a jungle duck, and two literary characters: Sherlock Holmes and The Mad Hatter.

Maxine gathered her competitors before lockdown for a school project about occupations, but pandemic-related restrictions closed the specialist school and put the project on hold.

So far, the Whitmores have raised over £1,500 with donations coming in from across the world.

Maxine said: “As a family we’ve always been long-term supporters of The Salvation Army because they stand for belief in action… they’re Christians with their sleeves rolled up who get stuck in where the need is”.

The water duck race can be viewed here at 2pm on Saturday 29th August in the Whitmore family garden. 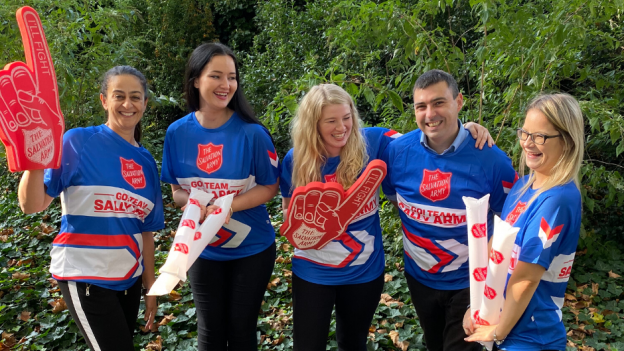 Coronavirus may impacted fundraising events but there are still many ways you can support our work.