Support for 999 workers during Storm Christoph

The Salvation Army provided support to emergency services as they moved residents from homes in Didsbury, Greater Manchester as they were at risk of flooding on Wednesday night.

They also offered a listening ear to those who had been helping with the evacuation of about 300 homes during heavy rain and later a snow blizzard.

The response was led by Major Nigel Tansley, who runs three Emergency Response Vehicles in the north west along with Major Mark Lewis, church leader from our Wigan Corps, and team member Sue Abbot who were in touch with 999 services throughout the day before helping set up the canteen.

Major Nigel, who stayed with the team until the early hours, said: “The Salvation Army’s Emergency Response team plays a key role in supporting the emergency services particularly when attending an incident. We can offer a blanket and a cup of tea, a friendly smile or a prayer, and it can make all the difference.”

Major Donald Montgomery, Sale Corps Officer, said: “We were privileged to serve the emergency services personnel. Support was given from 10pm through to 4.30am when the majority of staff concluded their shift.

“We are also grateful to our church members who helped or who were willing to support. Our prayers continue for all those affected by the flooding and those who are engaged in emergency services.”

In Doncaster, South Yorkshire, volunteers with the Emergency Response Vehicle fed emergency and utility workers who were helping with flood prevention work, while their corps building (church) was on standby to provide emergency shelter to people evacuated from their homes.

Salvation Army volunteers in Skewen, South Wales have been out serving food and drink to the emergency services as they support flood victims. Our church in Skewen is also being used as a distribution centre to help get essential items to those whose homes have been flooded. 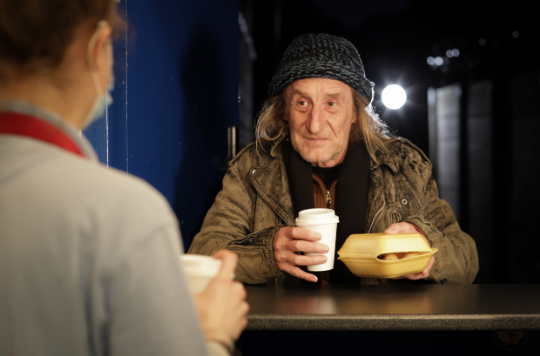