Sky’s the limit as airspace reopens for sponsored skydivers

The first sky divers jumping to raise money for The Salvation Army have taken to the skies after lockdown restrictions on the sport were eased.

Among the first to jump was Lizz Ashton from Alnwick who works for The Salvation Army at the Alnwick charity shop. She was motivated to take part upon hearing about the church and charity’s vital work supporting victims of modern slavery. She said: “I was so taken by the messages of the ‘We Are Not For Sale’ tattoo campaign for Anti-Slavery Day that I am having the Salvation Army anti-slavery logo tattooed on my wrist”.

She said: “I sympathise with the victims of those trafficked and enslaved. They aren’t really victims but survivors of this terrible crime. The care and recovery provided by The Salvation Army for these survivors is vital and in high demand and it’s worth it. So, I thought, it’s a worthy cause and so did the people that sponsored me. I can’t thank people enough for supporting me, I had some people that donated anonymously, so don’t know who they are, but would like to thank them too”. 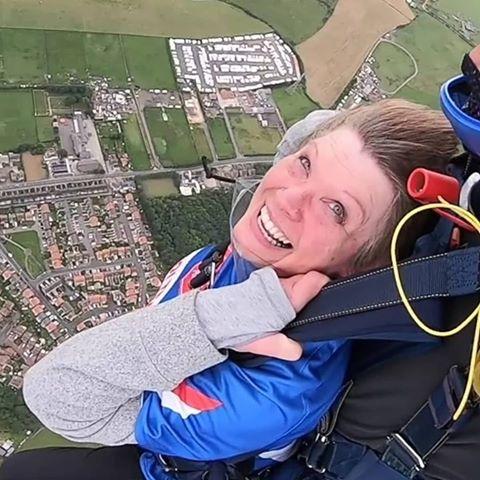 Lizz did a tandem skydive from 15,000ft with one minute of free-fall on 19th June. She said: “During the free-fall you could feel all the air rush past you at 120mph, it was just fabulous, but the noise was immense, and it felt very cold, but, it was exhilarating! When the chute opened it felt like I’d been in an emergency stop and it all went very quiet.”

Liz raised £828 by the end of July. She is still looking for more donations through her Justgiving page  and she is already considering her next fundraising event to support survivors of modern slavery.

Glasgow man, Mick Wright, is set to jump out of a plane on 5 September* to raise money for a homelessness project that transformed his life. Mick first came to the Salvation Army in March 2018 following the breakdown of his marriage and the loss of his job and home. He was given support by The Salvation Army’s supported accommodation centres in Glasgow before being offered a permanent home through the Housing First project - which offers a ‘wrap around’ support to help people stay in their home and tackle the reasons that they ended up on the streets in the first place.

Mick credits the project, especially his support worker Sharon, for turning his life around. He said: "I had been working full-time as a chef but when my marriage collapsed, I lost my job and eventually my home.

"Sharon, my support worker, is a lifeline - from making sure I've paid my bills to reminding me about attending appointments. It's been life-changing”.

Mick has settled into his own home and is in touch with his children again. He said: "Now I'm settled, I want to give something back to the Salvation Army for that support. When I heard about the charity skydive it seemed the perfect opportunity. Jumping out of a plane is something I've always wanted to do but never had the courage. Now I'm a much more confident person so it's not as terrifying as it once was”. 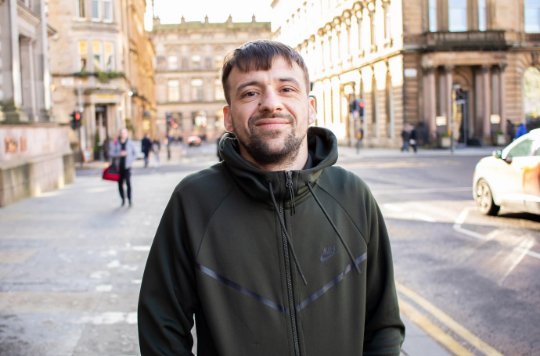 Due to the coronavirus restrictions The Salvation Army has re-imagined fundraising ideas for people who want to support the church and charity. As well as skydiving re-starting there are plenty of virtual and creative ideas to get involved. They include initiatives including response runs and cycles, virtual dinner parties, sleepouts, book club, The Salvation Army ‘shear-off’ and quiz. See more details on how to get involved.

To help Mick achieve his fundraising target, you can donate online at: https://www.justgiving.com/fundraising/mick-wright84

*Mick's sky-dive has been re-scheduled due to weather conditions.

Thinking about doing a skydive for us?