A Salvation Army bandsman, who carried the Olympic Torch through Hatfield Peverel on Friday 6 July, has recalled how the experience was "very humbling."

Nominated for his contribution to bringing the sport of archery to thousands of young people across the UK,  John Willson, 69, received an extra large cheer as his route passed in front of the regional offices of The Salvation Army, the organisation where John first started to teach archery to young people through its scouting groups in Hadleigh, Essex.

Members of the John's local Salvation Army, Hadleigh Temple Corps braved the torrential rain to cheer on the torchbearer and crowds with music and refreshments.

Speaking about carrying the flame, John said: " Holding that torch was an absolutely wonderful experience and very humbling. It was just perfect." 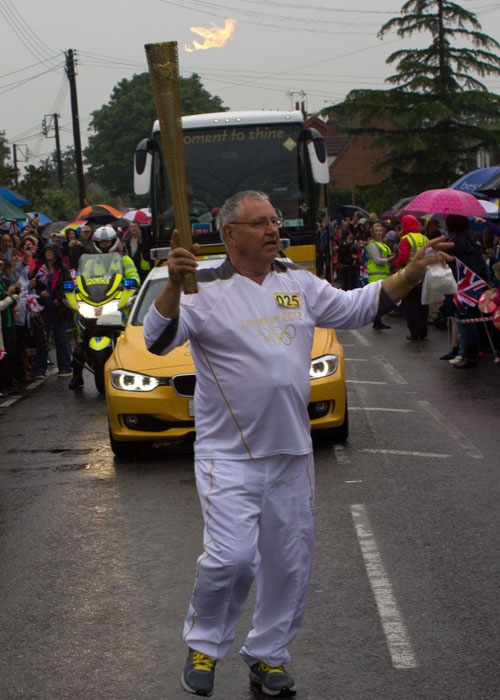 As a coach of Archery GB, John has been supporting Team GB archery coaches in their preparations for London 2012.  As well as hours of voluntary work for Rayleigh Town Archery Club and with Essex Sport, John has been instrumental in bringing archery to young people who might never have had an opportunity to engage with this sport with the development of archery within PE GCSE’s and the Duke of Edinburgh award scheme and working with his coaches to deliver archery to disabled people.

When John learned that he was to be an Olympic Torchbearer he was overwhelmed and very humbled. Typical of his selfless nature and enthusiasm for inspiring children, after he has run his leg of the Olympic Torch Relay, John will be dashing back to Hadleigh to let people have a closer look at his torch. First he will visit a couple of schools where he teaches in Hadleigh and then to The Salvation Army’s church, Hadleigh Temple, to await the torch’s arrival in Hadleigh. Next week he is taking his torch to show trainees at The Salvation Army's Hadleigh Training Centre.

John’s family links to Hadleigh started with The Salvation Army when his grandfather moved here to work as a master brickmaker in the 1890’s at The Salvation Army’s Hadleigh Farm Brickworks where the organisation’s founder, William Booth, demonstrated his commitment to giving destitute and socially excluded people a chance to improve their lives by learning skills to help them gain employment.