The Salvation Army’s debt advice centres saw requests for help increase by 28% last year[1] as pandemic poverty took hold of many vulnerable households. To meet demand, teams have been working longer hours and services have been expanded across East Scotland, the Isle of Man, Birmingham, Middlesbrough and Exeter.

A quarter of all people given debt support by the church and charity needed help negotiating with creditors, councils and landlords to pay for basic bills including utilities, council tax and rent.

With unemployment at the highest level for five years[2], the debt advice centres are bracing themselves to support more people pushed into financial hardship.

“The Government took swift action to cushion the country from the economic fall out of the pandemic. This action safeguarded the livelihoods of millions of people. Schemes like the Universal Credit uplift and furlough were lifelines, but for many it wasn’t enough to prevent a slide into debt.

“It’s not just people who have lost jobs, nearly a fifth of those who got in touch with us last year cited low income as the main source of their debt, reflecting the rise of in-work poverty which now affects one in eight families in the UK[3].”

The Salvation Army is calling on the Government for a range of measures to prevent more people falling into debt and to make it easier for those already in financial difficulty to pay off their debt. These include:

The Salvation Army has 22 FCA approved debt advice centres across the UK. As well as offering financial advice, debt centres give practical and emotional support to help people cope with the pressure of being in debt.

Devon and Cornwall Debt Advisor, Nadine retells a case that moved her:

“A man in his 60s came to us having been made redundant after 40 years in employment and he was living on the breadline. He couldn’t afford food, wasn’t able to pay for basic bills and was facing the prospect of living in his car as he was unable to pay for rent.

“Thankfully we were able to intervene. We gave him a food parcel, ensured he had an energy supply and advised him on how to apply for Universal Credit and other benefits. We negotiated with the landlords, explained to him his legal rights and the processes to get help with housing”.

“I don’t know what would have happened to him if he hadn’t sought our help, but nobody can survive without food and live in a car during winter”.

“Managing debt is more than just a repayment plan, we can provide the food parcels as well as letters to creditors.  We will also maintain a relationship with that person throughout their journey, linking them up with their local Salvation Army for ongoing support and companionship.

“The mental strain of being unable to pay basic bills is often overlooked. I fear we will see more relationships break down and more people feeling suicidal as they face potential eviction.”

“There were times I felt like I had no-one who I could call and because I’m ill, it was all too much. I thought I would kill myself. But I thought who would my son turn to? I realised I would be running away from my problems. 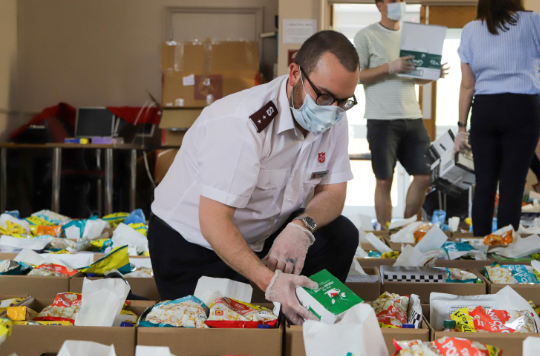