Salvation Army volunteer Carole Ann Dacey, who made more than 70,000 packed lunches during the pandemic and has spent a decade supporting the homeless in Cardiff, won a Platinum Champion award and attended the Big Jubilee Lunch and the Party at the Palace.

The lunch was held at the Oval cricket ground in London over the Jubilee weekend and was hosted by the Duchess of Cornwall and attended by His Royal Highness, the Prince of Wales. Carole and her husband Chris were also guests at the Buckingham Palace concert on Saturday night.

The Platinum Champions Awards were launched by the Royal Voluntary Service in honour of Her Majesty the Queen’s 70 years of service.

Carole said “The weekend was so unreal, it was like a dream. I didn’t want it to end, I really didn’t. I was so overwhelmed with it all.”

Carole spent a large part of her volunteering time supporting people who used The Salvation Army’s Purple Bus in Cardiff. She was also a volunteer at the church and charity shop in Penarth.

As well as food, Carole provided a sympathetic ear for people who visited the bus, and she has also escorted victims of modern slavery to safehouses as part of her volunteering for The Salvation Army.

During the height of the pandemic, Carole made 260 packed lunches and breakfasts every day to be delivered to the homeless. “When I had to stop working, I promised that I would devote all of my time to volunteer work. I love it and I’m so pleased to be in a position to be able to do it.”

Catherine Docherty, Salvation Army Outreach Manager said:  "We are absolutely delighted that Carole's tireless commitment to Salvation Army is being celebrated by the Royal Voluntary Service, in honour of the Queen's Jubilee. It is amazing that Carole has been recognised as a Platinum Champion and that she has been invited for lunch at Buckingham Palace. We are privileged to have Carole's voluntary support across our outreach services in Cardiff.

Carole and her husband Chris are an amazing pair, who offer an incredible amount of care and compassion to those around them, experiencing difficult times. We are immensely proud.” 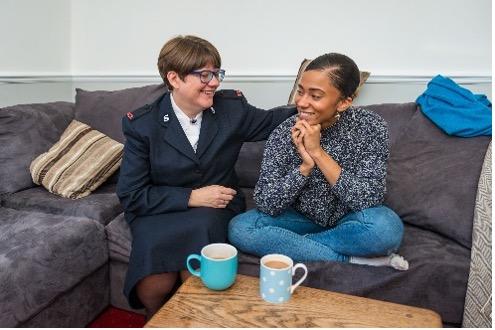