The Salvation Army’s new Incident Support Unit in support of firefighters in Essex has had its first call-out.

The unit was called to support crews battling a huge blaze involving 600 tonnes of animal feed at a farm in Hall Road, Asheldham.

Major Barrie Sampson, Emergency Services Coordinator for Essex, said the call came on the day volunteers for the unit were due to begin training.

He said: “We were supposed to meet at 2pm at Hadleigh and the call came in at 9.45am. You could see the smoke for three to four miles on the way in. When we got there, crews were pumping water right the way down the drive and firefighters were dragging bales of hay out of the warehouse which was well alight.”

The Salvation Army spent several hours on site late last month and was asked to return at lunchtime the following day.

Major Sampson said: “We got back and set up for the shift change so those just coming in had direct access to fresh food and water. After a meeting with the incident commander, we stayed on site till 7pm. Before we left, we helped move local donations into the welfare unit.

“The fire had calmed down before flaring again in early hours of Thursday morning. Most of the firefighters who attended were retained and they all did a brilliant job. We look forward to supporting Essex County Fire and Rescue Service long into the future.”

Group manager Martyn Hare from Essex County Fire and Rescue said he was delighted to see the new partnership in action.

He said: “We’d like to thank the Salvation Army for coming and supplying refreshments for our crews who are working in very high temperatures.” 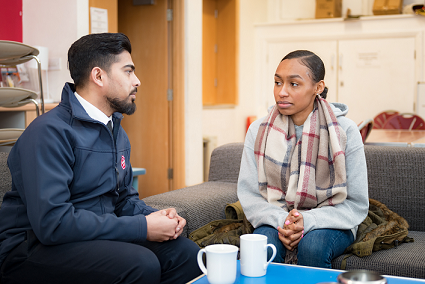