Reprinted from The War Cry - article by Philip Halcrow. Read the issue.

Almost everyone of a certain age can remember exactly where they were and what they were doing on the morning of 9/11.

The writers of the musical Come From Away—wife and husband Irene Sankoff and David Hein—can certainly recall the terrorist attacks of September 11, 2001.

“We were living in New York City, where Irene was studying for her master’s degree and I was working in a recording studio,” says David.

“We turned on the TV in time to see the second plane going into the towers,” remembers Irene.

“People responded in different ways,” says David, “but the response I remember most in the days afterward was kindness.”

“Over the years,” Irene reflects, “I think we forgot about that experience, in which people cared for each other whatever their backgrounds. But when we heard about what happened in Gander, N.L., there was something familiar about it.”

After American airspace was closed on September 11, dozens of planes were diverted to the Gander airport. At first, the passengers had to stay on the aircraft. But when they were allowed off—virtually doubling the population of the small town—the Newfoundlanders took them in until the planes were allowed back in the air days later.

“When we started researching the story,” David says, “we found out that there was going to be a commemoration ceremony in Gander on the tenth anniversary of 9/11 and that all these ‘come from aways’ (Newfoundland slang for those not born there) would be returning to reunite with the friends they had made, which itself spoke volumes about how important it was for these people.”

The couple journeyed to Gander, interviewing the people who had been there 10 years earlier and collecting their stories.

“Everyone had so many stories, and every story was better than the last,” says David. “We couldn’t wait to tell them.”

They told the stories by developing Come From Away, which has become a Broadway hit and is now playing at the Ed Mirvish Theatre in Toronto. “Irene and I joke sometimes that there were about 7,000 people on the planes and about 9,000 people in the town, so we returned with 16,000 stories that we wanted to tell in a 100-minute musical with 12 actors,” says David.

“We amalgamated characters and storylines to keep it concise, but every detail came from a true story.”

So, for instance, there are true stories behind the episode in which some of the stranded passengers are fearful about being bussed to a Salvation Army camp. They don’t understand where they are going or what is happening and can’t speak English. But their fears are allayed when one of the townspeople, spotting a Bible being carried by passengers, works out that if he points them to Philippians 4:6, they will be able to read in their own language the passage: “Be anxious for nothing.”

In 2001, he was in charge of The Salvation Army’s work in the area. On September 11, he learned of the terrorist attacks while sitting with other Salvation Army staff in a restaurant. “From that moment, we went into high gear.”

The Salvation Army worked alongside Gander Mayor Claude Elliott—who worshipped at an Army church—and other individuals and groups to help people with a host of needs.

“The next afternoon,” says Lt-Colonel Alf, "I received an urgent request informing me that 3,000 meals were required by 6 p.m. for the passengers who had begun to disembark. I went on local television and made an appeal for whatever people could provide—stews, casseroles, whatever.

“We more than met our goal.”

“Along with many other groups, we also provided new clothing, as the people had not been able to take any of their belongings from the planes,” Lt-Colonel Alf says. “A number of passengers stayed in private houses—people just opened their doors. The Salvation Army opened up five facilities: four of them were our church buildings and one was the camp.”

As well as the need for food and clothing, the stranded passengers had to make sense of their situation.

“None of the passengers knew what had happened until they got off the planes,” Lt-Colonel Alf says. “We ensured that there were counsellors available at every site to help with people’s emotional needs.”

In noting the actions of various sections of the community, Come From Away references the help given by The Salvation Army.

“We’ve seen the emergency committee notes,” says David. “There are 29 pages of what happened every single minute of those five days, and The Salvation Army is mentioned time and time again. The notes repeatedly say, ‘we have such-and-such a crisis’ and then, ‘The Salvation Army will take care of it.’ ”

Irene is impressed by the way the whole town responded to the unexpected arrivals from all kinds of backgrounds at a time of insecurity.

“Gander didn’t need to let these people off the planes at all,” she says. “No one would have questioned if they would have left the people on the planes or kept everyone sequestered at the airport.”

“But the people in Gander did not hesitate,” adds David. “A number of people have said that what happened at the time restored their faith in humanity.”

Not that the people who were in Gander see that what they did was something special.

“It’s the way the people of Gander and Newfoundland were raised,” says Irene. “You don’t ask questions, you just do what you were meant to do.” 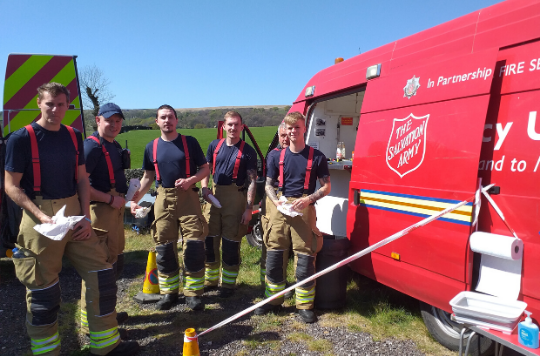 Providing practical and emotional support to the emergency services and local communities.