The High Sheriff of Cheshire has paid a visit to a Salvation Army Lifehouse in Warrington to meet with people experiencing a period of homelessness.

Mark Mitchell DL, who made his declaration as High Sheriff of Cheshire in April 2019, visited The Salvation Army’s Lifehouse, James Lee House, located on Brick Street in the Cheshire town, to learn about life on the front line from those that support the most vulnerable members of the community.

Matthew Davenport, service manager at James Lee House said: “We were so grateful that the High Sheriff took the time out of his busy schedule to come and visit James Lee House to see the work we do with the local community. It was a pleasure to have him and to bring very real, local issues to his attention.

“The visit had a positive impact on our residents and allowed us to show the High Sheriff the measures and opportunities that we put in place for the members of our community that have been vulnerable in the past and having to deal with the many challenges that homelessness brings.”

During his visit, residents spoke openly to Mr Mitchell about the issues that had led to them experiencing homelessness and he learnt about the help and support that the international Christian church and charitable organisation gives to the Cheshire town including through its weekly art classes which saw funding received to deliver a project to raise awareness of the dangers of illegal money lending.

He said: “What a tremendous encouragement it is to visit James Lee House and spend time experiencing all that they do and offer for local people that find themselves in difficult periods of their life. The care and professionalism shown by the team, across all departments, working with residents to get them back into independent living, was impressive.

“One of the highlights was the art workshop and seeing how art can be used as therapy to open discussions about issues that could affect vulnerable members of the community that may find themselves in the wrong place.

“The Stop Loan Sharks project is just one example; the difficulties illegal money lenders present is something that should be talked about.”

A grant, of £3,800 from Birmingham City Council, was awarded to James Lee House from the England Illegal Money Lending Team (IMLT) to raise awareness of loan sharks throughout the local community for those struggling financially.

Mr Davenport added: “Here at James Lee House we work with a range of partners and local groups across the county, including Cheshire Constabulary and Your Housing, and we give people in need a home, somewhere they can feel safe and find stability, whilst also allowing them a chance to rebuild their lives through our many workshops including our weekly art programme.”

James Lee House provides a regular programme of activities aimed at empowering the residents to see their strengths, develop the belief and strive to release their potential in everything they choose to take part in.

The Lifehouse has been part of the town for more than five decades and provides 54 beds for men and women over the age of 18 experiencing homelessness in and around Warrington. Run by The Salvation Army, the Lifehouse celebrated its 50th anniversary in July 2018. 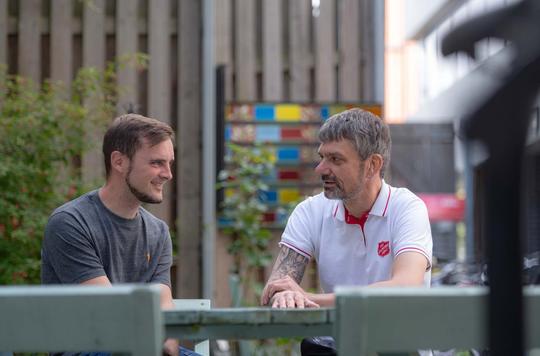